‘Black Lightning’ To End After Season 4, New Spinoff ‘Painkiller’ In The Works

‘Black Lightning’ To End After Season 4, New Spinoff ‘Painkiller’ In The Works

The “Black Lightning” era is coming to an end.

After the upcoming fourth season of The CW show, the series will come to an end. The announcement was made Friday (November 20) just days after news that a spinoff was on the way. The developer and executive producer of “Black Lightning” Salim Akil posted a lengthy message on Instagram in response to the announcement.

When we first started the Black Lightning journey, I knew that Jefferson Pierce and his family of powerful Black Women would be a unique addition to the super hero genre. The love that Blerds and all comic book fans around the glove have shown this series over the past three seasons proved what we imagined, Black People Want To See Themselves in all their complexities.

Salim Akil went on to recognize and thank everyone involved in making this particular dream a reality:

Thank you to the phenomenal cast, writers and crew without whom none of this would’ve been possible. I’m incredibly proud of the work we’ve been able to do and the moments we’ve been able to create in bringing DC’s first African-American family of super heroes to life for the culture. 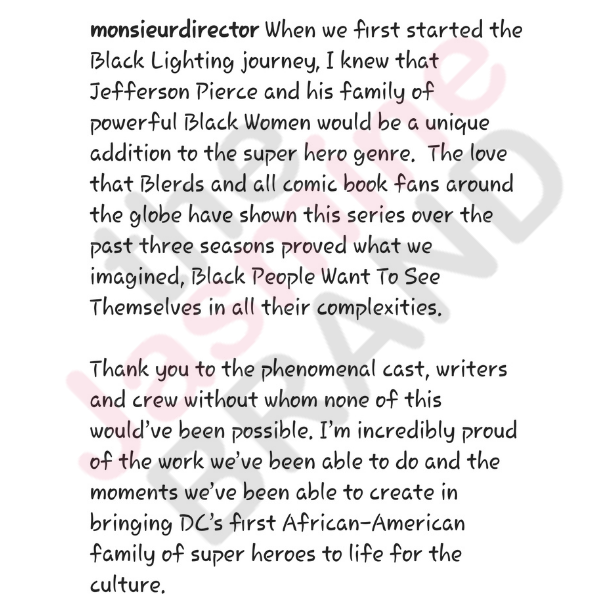 In a statement, Salim Akil also said that he was looking forward to continuing to work with The CW:

While season four may be the end of one journey, I’m extremely excited to usher in a new chapter and continued collaboration with The CW as we tell the story of ‘Painkiller.’

The show will discuss the guilt he feels from his past considering at one point he was both a weapon of Agent Odell in the ASA and a member of Tobias Whale’s gang. Now, Khalil Payne (Painkiller’s real name) has shut himself off from associates and is working to find peace in a new city called Akashic Valley. However, it seems that Painkiller still can’t find that much sought-after peace and he’s pushed back into working to bring justice back but he still has to deal with his dark side.

What do you think about Black Lightning coming to an end after its fourth season? Sound off in the comments!