Diddy Says We’re On The Verge Of A Race War & The Priority Is Getting Trump Out Of Office: White People Should Be Scared To Death Of This Man!

Diddy Says We’re On The Verge Of A Race War & The Priority Is Getting Trump Out Of Office: White People Should Be Scared To Death Of This Man!

Sean ‘Diddy’ Combs has taken to social media urging people to vote Donald Trump out of office. In a series of tweets he warned that the country is in the middle of a race war. He writes:

“The NUMBER ONE priority is to get Trump out of office. HE HAS TO GO. We can’t allow this man to continue to try and DIVIDE US. The people that have the most responsibility and should be SCARED TO DEATH of this man are white people. WE ARE ON THE VERGE OF A RACE WAR.”

In another tweet, he explained that we need to vote Joe Biden into office and then hold him accountable.

“We need to get Biden in and hold him accountable. Trump has taken things too far. As Black people, we aren’t even a topic of real discussion. We can no longer stand for doing the same thing over and over expecting different results. That’s insanity! It’s time we unify.”

So, I’m launching one of the boldest things I’ve ever launched. I’m launching a Black political party with some young Black elected officials and activists. It’s called
@OurBlackParty, it doesn’t matter if you are Republican or Democrat…

The mission is to create a platform to help advance a political agenda that addresses the needs of Black people. So, going forward we aren’t in the same position we are in today. Visit http://OurBlackParty.org for more info. 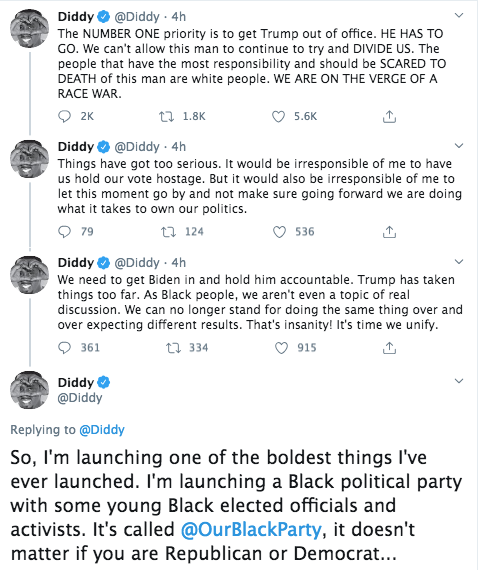 Diddy’s recent comments contradict his statement from earlier this year, where he seemingly told blacks to hold their vote hostage.

Attention to all … THE BLACK VOTE WILL NOT BE FREE THIS YEAR.

What are your thoughts about Diddy’s remarks and new party? Let us know in the comments.