While Salt-N-Pepa is opening up about what to expect from their upcoming Lifetime biopic, DJ Spinderella (real name Deidra Muriel Roper), has released a statement about not being a part of it.

“Too often, Black women who have made meaningful contributions in their industry are left out of historical narratives. Back when Salt n’ Pepa was building our legacy, which is rooted in empowering women, I could not have dreamed that this same group would one day disempower me.”

“Words cannot fully express my disappointment when I learned a decision was made to move forward with a Lifetime biopic that wrongfully excluded me from every aspect of development and production – all the while using my image throughout, given that I played an integral role in the group’s story and success.” 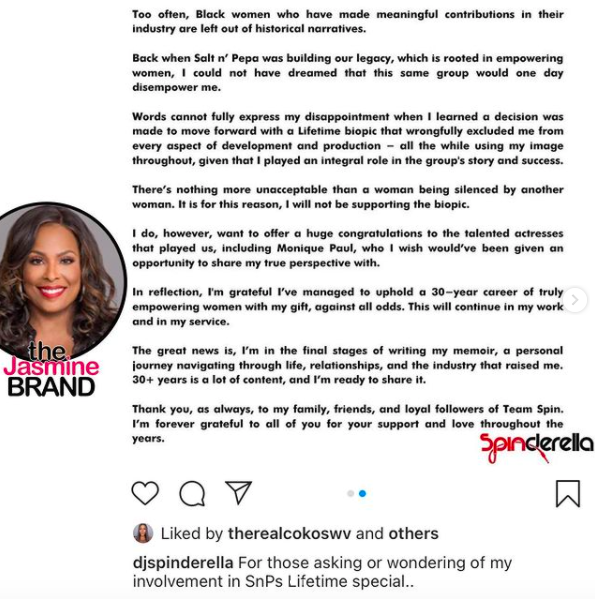 She went on to say that she won’t be backing the project.

“There’s nothing more unacceptable than a woman being silenced by another woman. It is for this reason, I will not be supporting the biopic.”

While she’s not supporting it, she did congratulate the actresses who star in the biopic, including Monique Paul, who will portray her. 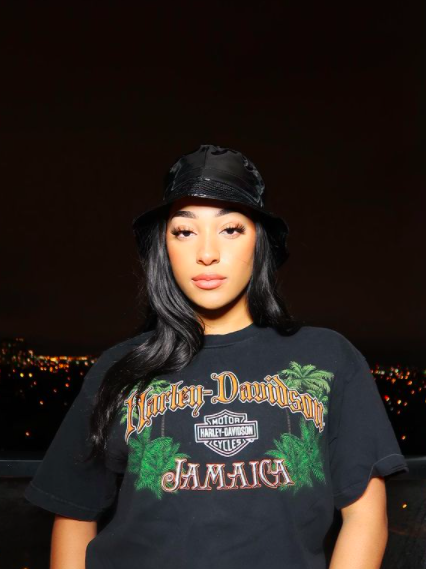 She added that she’s working on a memoir to share her own story.

Spinderella has had several issues with Salt N Pepa (real names Cheryl James and Sandra Denton respectively). In August 2019, she requested a restraining order against the ladies amid a lawsuit against them. Her lawyer, Paul Stafford, said back then:

“Spinderella is seeking injunctive relief due to the immediate and irreparable harm that has been caused to her due to the acts and omissions of the defendants. Before we filed this lawsuit, we intended to resolve the matter with all the defendants, but we were unable to do so, and it’s unfortunate that the defendants have chosen not to try and honor Spinderella’s role in the group or their financial or legal commitments to her. So she was in a position where she had to force her rights and protect her brand, so that’s what we’re doing.”

Spinderella, who also reportedly took issue with having a limited role in Salt-N-Pepa’s reality show, joined the group in 1987 and said her issues started in 1999 when the Best of album was released. She said she was informed she’d get a third of the royalties, $125,000, which she allegedly never did. She also said she was told she’d be a part of the duo’s series on VH1, but only made a handful of appearances. She added that she didn’t get anything when the trio performed for the Billboard Music Awards in 2018.

She reportedly filed a lawsuit after SoundExchange, a royalty company for artists, told her Salt-N-Pepa brought in more than $600K over the past 10 years, which Spinderella said she didn’t get any of.

Insiders responded and said Spinderella is not an owner in the Salt-N-Pepa brand, so she can’t sue for trademark infringement. They added that no one received compensation for the BMA performance and that she was paid as an independent contractor for the Best of album.

What do you think about Spinderella’s statement? Comment and let us know.