Donald Trump Slams Barack Obama’s Eulogy For The Late John Lewis: I Thought It Was A Terrible Speech 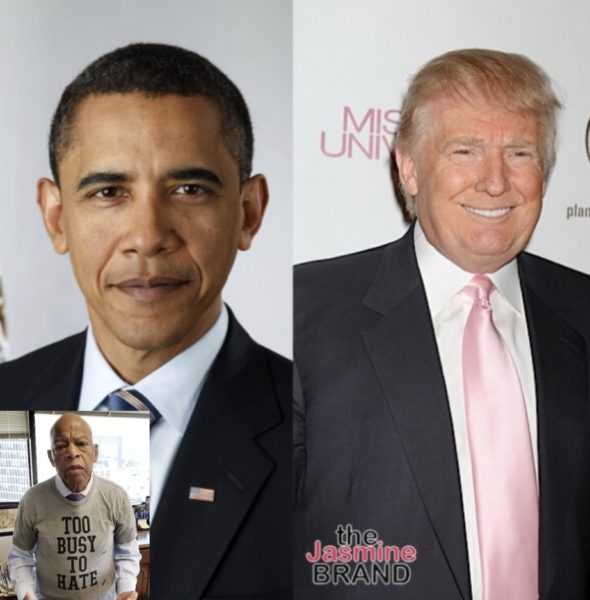 Donald Trump Slams Barack Obama’s Eulogy For The Late John Lewis: I Thought It Was A Terrible Speech

During a Fox News interview on Wednesday morning (Aug 5), President Donald Trump slammed Barack Obama’s eulogy for John Lewis. Civil right leader, Congressman John Lewis passed away at the age of 80 on July 17, 2020. He was well-known for his leadership in the civil rights era. He also helped organize the 1963 March on Washington and served in Congress for decades.

In his speech, the former president condemned Donald Trump’s campaign efforts to suppress voting and Black’s civil rights, while praising the John Lewis for his decades worth of contribution to the cause. This did not sit well with Donald Trump.

“I thought it was a terrible speech. It was an angry speech,” Trump said. “It showed his anger there that people don’t see. He lost control and he’s been really hit very hard by both sides for that speech. That speech was ridiculous.”

I thought the speech was totally inappropriate, very bad. A lot of people don’t realize that — I said the other day , he fought just as hard  or harder than Hillary so that Hillary won. I didn’t know him. [Obama] was somebody who wanted me not to win.

In the eulogy given at Ebenezer Baptist Church last week (July 30), Barack Obama elaborated on what he says is Trump’s attempt at taking away Americans voting rights, while remembering Lewis for his fight against that very exact thing. He stated:

“Even as we sit here, there are those in power who are doing their darndest to discourage people from voting by closing polling locations, and targeting minorities and students with restrictive ID laws, and attacking our voting rights with surgical precision. John Lewis devoted his time on this Earth fighting the very attacks on democracy and what’s best in America that we are seeing circulate right now.”

We previously reported (Aug 4) how Trump refused to acknowledge the late Lewis’ accomplishments after his passing.

When reporter Jonathan Swan asked how history would remember Lewis, the president replied:

“He chose, I never met John Lewis, I don’t believe.”

When asked if he believed that Lewis was impressive, Trump refused to respond and instead offered

Later on, Trump finally admitted that Lewis absence from his inauguration left an impression on him,

“That’s his right. And again, nobody has done more for Black Americans than I have. He should’ve come. I think he made a big mistake.”

See the clip below.

Do you believe that Trump was right to criticize Obama’s speech? Share your thoughts with us in the comments.