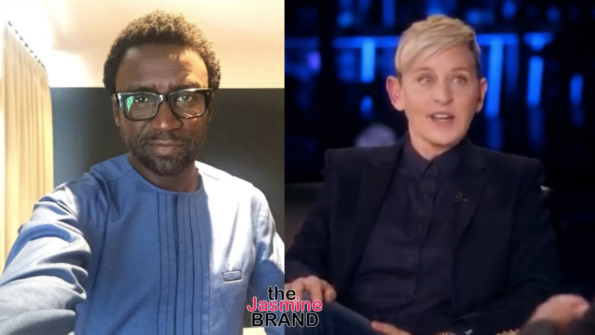 The Ellen DeGeneres Show just can’t seem to catch a break. As previously reported, many past employees of Ellen DeGeneres’s daytime talk show have been coming forward with concerning allegations about their time working on the show. In order to protect themselves, many of the ex-workers have shared their stories anonymously until now. On Tuesday (Aug. 4th), Tony Okungbowa shared a photo and message via Instagram to show his solidarity with his former colleagues from The Ellen Show. Tony Okungbowa was the resident DJ of The Ellen Show from 2003-2006 and again from 2007-2013.

Hey Guys, I hope you are all keeping safe out there during these trying times. I have been getting calls asking me about the Ellen Degeneres Show and I would like to address the time I spent there. I was on air talent from 2003-2006 and from 2007 -2013. While I am grateful for the opportunity it afforded me, I did experience and feel the toxicity of the environment and I stand with my former colleagues in their quest to create a healthier and more inclusive workplace as the show moves forward.” 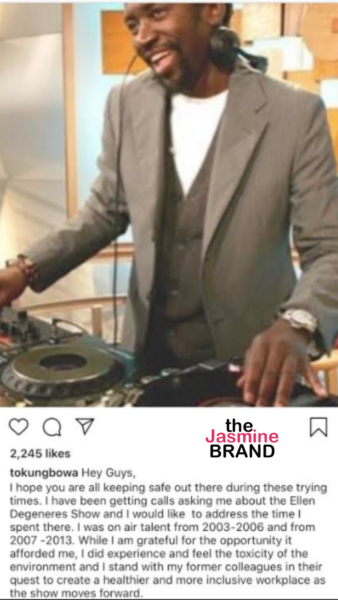 The Ellen DeGeneres Show is currently under internal investigation by WarnerMedia due to the multiple claims that have come out against the program and its producers. While speaking on the alleged toxic environment of the show one former employee shared with BuzzFeed News that the show preys on inexperienced workers.

“They hire people who maybe are inexperienced with how a functional, nontoxic work environment actually is, or someone who just wants to be in that atmosphere so bad that they’ll put up with it. They kind of feed off of that, like, ‘This is Ellen; this is as good as it gets. You’ll never find anything better than this.”

Following the initial claims against the show, Ellen DeGeneres issued an apology letter to her former employees. She wrote,

“On day one of our show, I told everyone in our first meeting that ‘The Ellen DeGeneres Show’ would be a place of happiness — no one would ever raise their voice, and everyone would be treated with respect. Obviously, something changed, and I am disappointed to learn that this has not been the case. And for that, I am sorry.”

“As we’ve grown exponentially I’ve not been able to stay on top of everything and relied on others to do their jobs as they knew I’d want them done. Clearly some didn’t. That will now change and I’m committed to ensuring this does not happen again. As someone who was judged and nearly lost everything for just being who I am. I truly understand and have deep compassion for those being looked at differently, or treated unfairly, not equal, or — worse — disregarded. To think that any one of you felt that way is awful to me.”

What are your thoughts on what Tony Okungbowa had to say? Let us know in the comments.