Gabrielle Union Calls Out Terry Crews For Not Being An Ally: If You’re Not Going To Help, Then Get Out Of The Way.

Gabrielle Union Calls Out Terry Crews For Not Being An Ally: If You’re Not Going To Help, Then Get Out Of The Way.

Gabrielle Union isn’t holding anything back when speaking on her former America’s Got Talent co-star Terry Crews. Recently the ‘Bring It On’ actress joined journalist Jemele Hill for an episode of the Jemele Hill Is Unbothered podcast and shared more insight of her opinion on Terry Crews.

Earlier this year, Gabrielle Union filed a lawsuit against NBC for racial discrimination she says she experienced while working on AGT.

After making her claims public, she received some backlash from critics who said pointed out that she wasn’t the only black person on the show. Gabrielle Union took some time to address this criticism while speaking with Jemele Hill and said,

“I was like, ‘No, I was on there — with Terry Crews. Based on his recent actions, do you really think Terry Crews was an ally, was helpful, was a sounding board? I think Terry Crews is showing us who he is and what he does during times of adversity and it’s not solidarity.”

Initially following her complaints against the network, Terry Crews spoke out against her claims and said racism wasn’t something he experienced on the show.

Gabrielle Union talked about how his remarks were disappointing because she stood by him when he came forward with his sexual assault allegations at the start of the #MeToo movement. She said,

“Not to say if I offer you solidarity I expect you to be the getaway driver during a bank robbery — that’s what he made it sound like in one of those series of tweets. If you saw something, say something. If you didn’t have my experience… you also have an option to say, ‘I believe Gab, I just had a different experience.’ End of story.”

“You don’t have to do a press tour where your sole objective is to discredit and malign me. You know, I’ve been in Hollywood a very long time. There’s very little that surprises me, but that was very disappointing for sure.”

Gabrielle Union also shared that she believes her battle against NBC for a fair workplace will also benefit Terry Crews as well.

“At the end of the day, the work that I am doing to make sure that NBC is a more fair and equitable place of employment will benefit [Terry] as well. So it’s OK to eat your cereal and let me do my thing and get out of the way. If you’re not going to help, then get out of the way. If you don’t feel financially comfortable, or spiritually comfortable or you flat out disagree, but at the end of the day he will benefit from a safer, more equitable workplace from what I stuck my neck out to do and got fired for, you know? Instead of actively working against progress.”

During the hour-long conversation, Gabrielle Union hinted that more will soon be revealed regarding her lawsuit and claims against AGT, and in the long-run Terry Crews will regret the side he chose.

“Since I’ve been so vocal about what happened, the floodgates have opened. This reckoning is just hitting. There is so much more that is coming… I have a feeling [Terry Crews] will probably regret it for a thousand reasons, very soon.”

Terry Crews did offer Gabrielle Union an apology via Twitter for not standing with her when she initially spoke out against NBC. 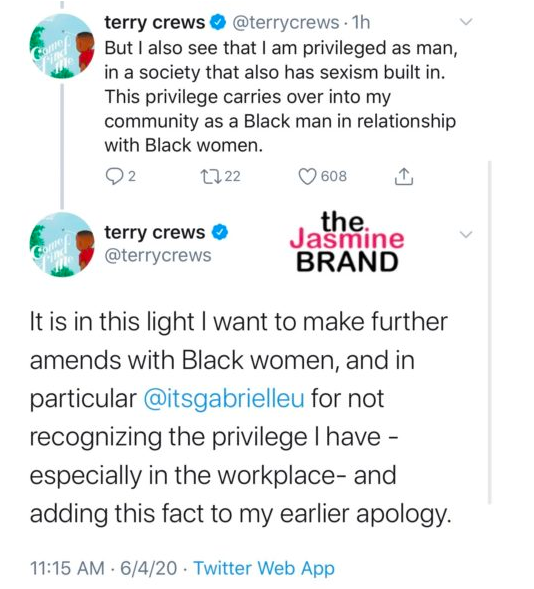 However, it may have been a little too late. Following his apology, Gabrielle Union’s husband, Dwyane Wade, tweeted

What are your thoughts on what Gabrielle Union had to say about Terry Crews? Let us know in the comments