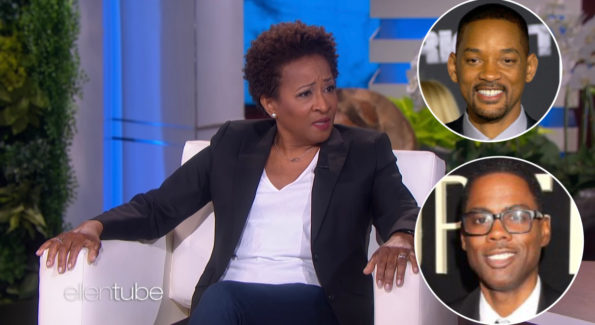 While performing on her self titled comedy tour, Wanda Sykes, 58, took time to readdress the moment Will Smith infamously slapped Chris Rock at the awards show. The comic, who previously stated she felt “physically ill” watching the attack, admitted she still becomes emotional speaking about the incident. Reportedly, she stated:

“I’m still traumatized….I can’t talk about it. I get emotional.”

Continuing, the Bad Moms actress expressed her disbelief at the controversial decision to allow the Oscar winner to remain seated following the hit. She stated:

“I couldn’t believe he was still sitting there, like an a***hole….Shouldn’t you be sitting there with a lawyer or LAPD, motherf****?”

In a rage provoked move, the King Richard star took the stage and hit Oscars host Chris Rock for referencing his wife, Jada Pinkett Smith’s, bald head during a joke. Jada Pinkett Smith has openly spoke about the need to shave her head as a means to dealing with her alopecia medical condition.

Will Smith just punched Chris Rock and told him "keep my wife's name out of your f***ing mouth" pic.twitter.com/YK5aQqv89t

Wanda Sykes first addressed her reaction to the infamous TV moment during a previous interview. The performer stated that she was “disgusted” by Will’s action’s, and shared that Chris Rock apologized to her subsequent the incident. She stated:

“He was like, ‘It was supposed to be your night. You and Amy and Regina were doing such a great job. I’m so sorry this is now gonna be about this.’ “

“Because that’s who Chris is.”

Will Smith publicly apologized to the Academy while accepting his first Oscar, winning the category of best leading actor for his starring role in the film King Richard. Post-show, Will apologized to Chris for the slap via social media post, before resigning from the Academy and receiving a 10 year ban from attending.

Do you relate to Wanda Sykes perspective on Will Smith’s slap? Let us know in the comments section.